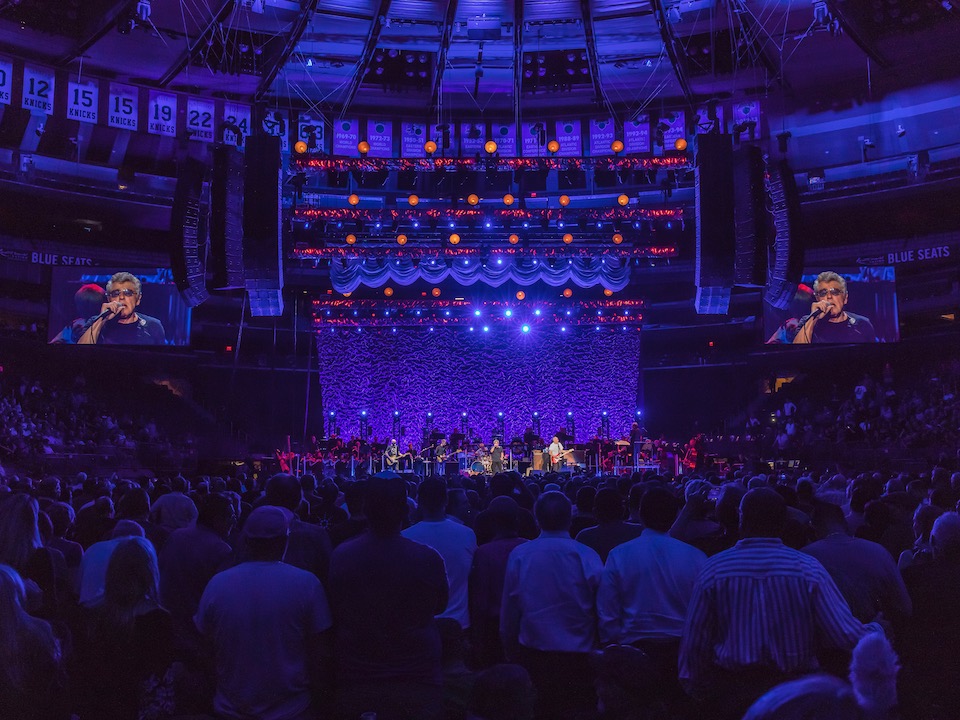 The Who are currently between legs of their 2019 Moving On! Tour, which finds the rock icons joined by a local orchestra in each city to present unique takes on classics and deep cuts from their extensive catalogue. To faithfully and simultaneously reproduce the delicate nuance of the orchestra and uncompromising rock on which they’ve built their career, The Who are carrying a sizeable Adamson E-Series system provided by Cleveland, OH’s Eighth Day Sound.

Chris “Chopper” Morrison, who shares FOH duties with The Who’s longtime engineer, Robert Collins, says that while this is the band’s first full outing to carry an Adamson system, the choice was informed by previous experiences with the E-Series on one-off and festival dates.

“We’ve done a few festivals in Europe the last few years and took note that, if it was an Adamson E-Series rig, it always sounded great. We never had to fiddle with the EQ or anything too much and Robert was always really happy,” the engineer reports. “I knew it would really suit the performances with the orchestra, with that really clean top end being critical.”

In its fullest configuration, the system for the Moving On! Tour is comprised of: main hangs of 15 E15 three-way, true line source enclosures over three E12 three-way, full-range enclosures per side; side hangs of 12 E15s over three E12s per side; 270-degree fills from Adamson’s S-Series, with four narrow-dispersion S10n two-way, full-range cabinets over eight standard S10s per side; and a complement of S10s and S7p point-source cabinets as front fills.

The low end is delivered from a hybrid system of nine flown E119 subs per side (in FBFFBFFBF cardioid configurations) and an additional 12 E119s stacked in front of the stage. 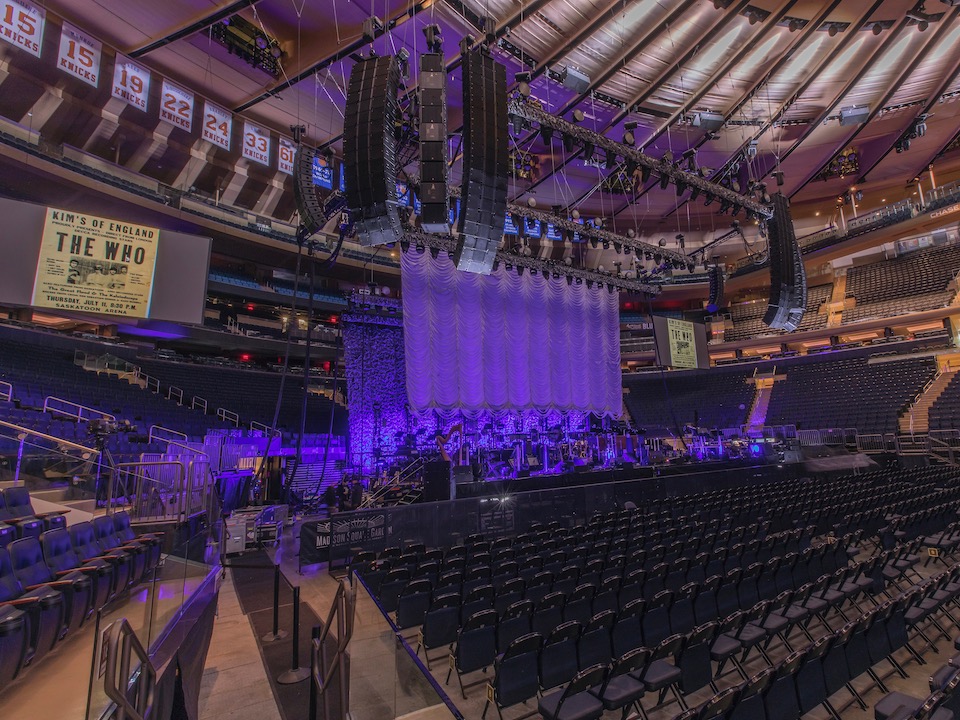 Eighth Day Systems Engineer Ben Smith notes that the benefits of the Adamson solution extend beyond its sonic performance and into more practical considerations, which are especially advantageous on this tour. On a typical stop, the PA gets loaded in at around 6:30 am and everything needs to be up and running for 1 pm to begin a five-hour rehearsal period.

“That’s where the rigging hardware on the E-Series really shines,” Smith offers. “This system rigs incredibly fast, and then between Blueprint AV [design and simulation software] and the E-Series presets in the Lake processor, we can get everything exactly where it needs to be quickly and easily. It’s a great-sounding system that checks all the right boxes in terms of sonic performance and practicality, which is such a confidence booster on a tour like this.”

Despite the inclusion of the orchestra, the Moving On! Tour is still a full-throttle rock experience. As band frontman Roger Daltrey told Rolling Stone ahead of the run: “The most important thing that people realize about this tour is that the energy and the venom The Who play with will not be compromised at all.”

“Compromise,” it seems, isn’t in Morrison’s vocabulary. “Once we had things dialled in, this system was just shining,” he says in closing. “The last show [of the first leg] sounded great, MSG was terrific, and we’ve consistently been hearing great things about the sound throughout the tour. I love this system.”

PHOTOS: Adamson E-Series system on The Who's Moving On! Tour stop at Madison Square Garden in NYC by Arnold Brower.