Currently out on his One World Tour, Martin has had sold out shows in Mexico City, Guadalajara and Monterrey with another 18 shows recently added to his schedule. Audio Systems del Norte, headquartered in Monterrey, has provided a complete Adamson Systems PA for the Mexican leg of his tour. Oscar Gamas, CEO of Sonotribe Audio Consultants in Mexico City, is responsible for designing and aligning the Adamson Energia sound reinforcement system. 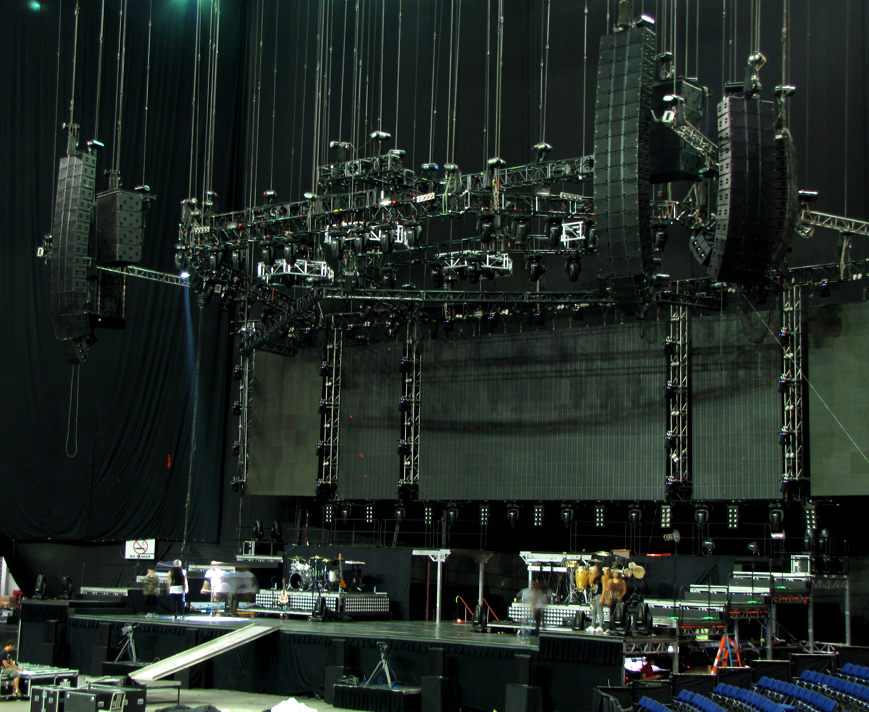 Gamas specified a main PA of Energia E15 and SpekTrix enclosures. The left/right arrays each consist of 16 E15s followed by four SpekTrix enclosures. Outfill is handled by two more arrays, this time made up of 12 E15s each. Twenty-four Y10 enclosures – 12 per array – handle back fill duties. In some venues the Y10s are used for delay clusters in order to extend reinforcement to the rear of each venue.

“I am always amazed at the precision of the frequency and phase response of this system,” Gamas explains. “I can achieve amazing clarity even at a high SPL, and all of this with less EQ than other big brands in the business. I can match the frequency response and coverage of each system show by show without the sense of transition between them.”

For low end Gamas deployed up to 32 T-21 subwoofers to deliver the driving beat the Latin pop star is famous for.  “The amount of flown subs and floor sub configurations varied in order to achieve the best low end response and control,” explains Gamas, who is also the system engineer on the tour. “Both the Sports Palace (Mexico City) and VFG Arena (Guadalajara) have difficult acoustics. In those cases we used 12 or 8 T-21s on the floor in a cardioid configuration to achieve control of the rear low end frequencies and flew the rest.”

By doing so Gamas achieved a better balance between the intelligibility of the main hangs and the low end of the entire PA when the system was EQ’d and time aligned. Adamson’s Blueprint AV™ software was integral in making setup fast and efficient with Gamas noting how accurate the software was from venue to venue. Alignment was done via SMAART v7.

“As a system engineer I am completely pleased with the efficiency, frequency response, tonal balance and headroom that one can obtain with this system,” Gamas concludes. “Between the E15s and T-21s, there is tons of headroom. Christopher “Privet” Hedge, the FOH engineer, has not stopped talking about how awesome the Adamson system is.”