The multi-purpose Jamsil Olympic Stadium was the original site for the 1988 Olympic Games and now serves as host to a variety of events, notably as a concert venue for South Korean and international artists. Spectator seats are distributed on two covered tiers. For the Paul McCartney concert, the stage was placed at the wide end of the stadium with seating on the field and also in the lower stadium tiers.

“We use different PA systems around the world – I try and pick what I believe is the best,” explains Paul “Pab” Boothroyd, FOH engineer for Paul McCartney. “With this being the only show in Korea, we were not travelling with a PA, and because the concert was at the Olympic Stadium, we needed a big PA. We had such a successful show with the Adamson E15 in Columbia, I was thrilled to be able to work with them again. Better yet, Adamson had introduced more products since that show so I ended up with an even better sounding rig than I remembered.”

Tristar utilized Adamson Blueprint AVTM software to model the stadium in 3D. Once the venue was designed, the Adamson system components – E15 and S10 line arrays, E218 subwoofers and the inner and outer delays – were placed in the design to ensure the best sound possible for the event.

The stadium layout required a throw of 160 meters distance and 32 m elevation to cover all of the seating areas. The goal was to achieve roughly 105 dBA +/- 3dB average SPL throughout the listening spectrum without any gain reduction from the system limiters. The Tristar team noted that the system performed exactly as Blueprint predicted.

Ultimately the main PA consisted of left-right arrays – each made up of 21 E15 enclosures with three S10s for down fill – hung from scaffolding columns constructed on each side of the stage. The E15 is a 3-way system consisting of two 15-inch and two 7-inch Kevlar® cone drivers, and two 4-inch Adamson NH4 compression drivers.

“The system has a ton of headroom,” Boothroyd adds. “The E15 is a very impressive box. The detail of what I always just call the voicebox – the Mid-High unit – is such a great design. It still sounds amazing.”

Twelve E218 subwoofers were flown behind both arrays for enhanced low end throughout the seating area. The E218 is features two lightweight, long excursion ND18-S Kevlar® Neodymium drivers mounted in an efficient band-pass cabinet. The design achieves a remarkable reduction of the rear-ward radiated energy without dedicated cardioid setups and algorithms.

“The subs added that extra low end that we need,” he continues. “Paul plays a wide variety of musical genres – everything from rock-n-roll to quiet ballads – so although we don’t need “in your face” low end, we did need something extra and these did the job quite nicely.”

“I would definitely recommend this PA to other engineers – I wouldn’t use it myself if I would not recommend it,” Boothroyd concludes. “I get offered equipment from manufacturers and promises all the time. Sometimes you don’t change – you need to stay with certain products that you know you can rely on. But sometimes you have to use something different. In this case it’s good. I like the way this sounds.” 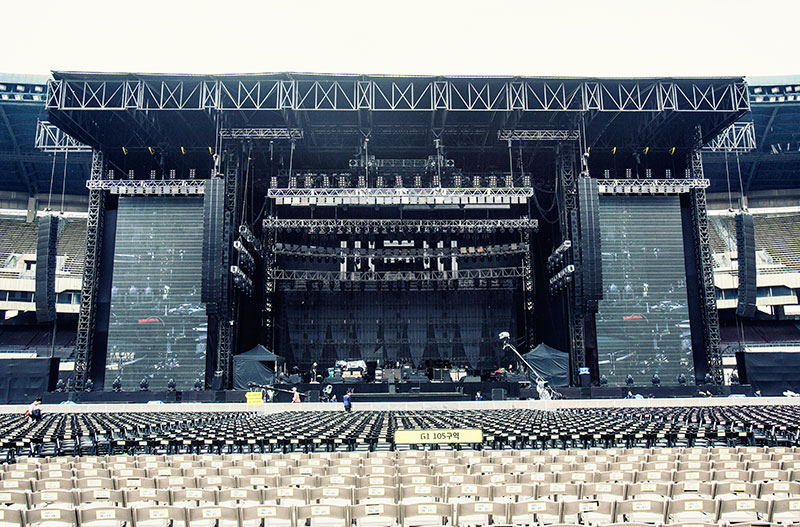