Eighth Day Sound recently took delivery of E-Series and S-Series loudspeakers to deploy for concert sound reproduction around the world. The music festival was their first time out with the complete rig. Eighth Day Systems Engineer C.W. Alkire, spearheaded the system design and set-up, working closely with Adamson engineer, Ben Cabot, to tune the system. 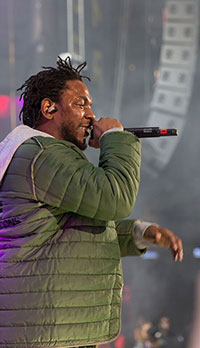 “We have had the E15 and E12 line arrays out before, but this was the first time we used them in conjunction with the new S10 compact line array and the E119 subwoofers,” explains Alkire. “We’ve done this show for years and I have to admit, the power and clarity this year was exceptional.”

The turntable stage was located at the far end of the stadium, positioned to offer maximum visibility to the fans. Seating was provided on the field as well as on all three concourse levels of the stadium. The main PA consisted of left-right hangs, each made up of 21 E15 and three E12 line array enclosures. Side coverage was courtesy of 28 E15 and 12 E12 enclosures divided equally between two more arrays. The 270 arrays utilized the new S10 line array enclosures. Both ten-enclosure arrays were positioned off and further around the stage to cover the peripheral seating areas beyond standard 180 degree seating chart.

“We used Adamson’s Blueprint AV software to design the system,” adds Alkire. “The 270 arrays ensured the audience to the far right and left of the stage had the same experience as everyone else. Because the S10s are so light and compact, we were able to hang the arrays off a single point – which made setup that much simpler.”

Because hip hop music is typically loud with a distinctive, driving low end, there were 72 subwoofers on hand to make sure the audience felt every nuance. Two arrays – made up of 12 E119 subwoofers each – were hung behind the main PA. In addition, 48 more E119s were ground stacked – 24 per side -- under each array.

Alkire continues, “It was a very loud show – running around 110 dB and never below 102 dB – and the HF and MF never went to the limit. The subs were rock solid and performed very well – tight and punchy with a nice low end extending below 40 Hz.”

The new E119 subwoofer, developed with input from Eighth Day Sound, not only bolsters the low-end of the E-Series but also meets the demand for a powerful, compact sub that would pack well into US trucks, UK trucks and sea containers. The enclosure is loaded with one light-weight, long excursion 19-inch SD19 Kevlar® Neodymium driver utilizing Adamson’s Advanced Cone Architecture and Symmetrical Drive Technology. The driver employs a dual 5-inch voice coil for exceptional power handling with a dual-spider suspension system for extra stability. The driver is utilized in a front-loaded enclosure, designed to reproduce clean, musical low frequency information.

The entire system is powered by 48 Lab.gruppen PLM 20K44 amplifiers which combine a true 4-in, 4-out configuration with a new Lake core module, Dante networked signal distribution, and system control and monitoring. The amplifiers were rack mounted and located under the stage during the event.