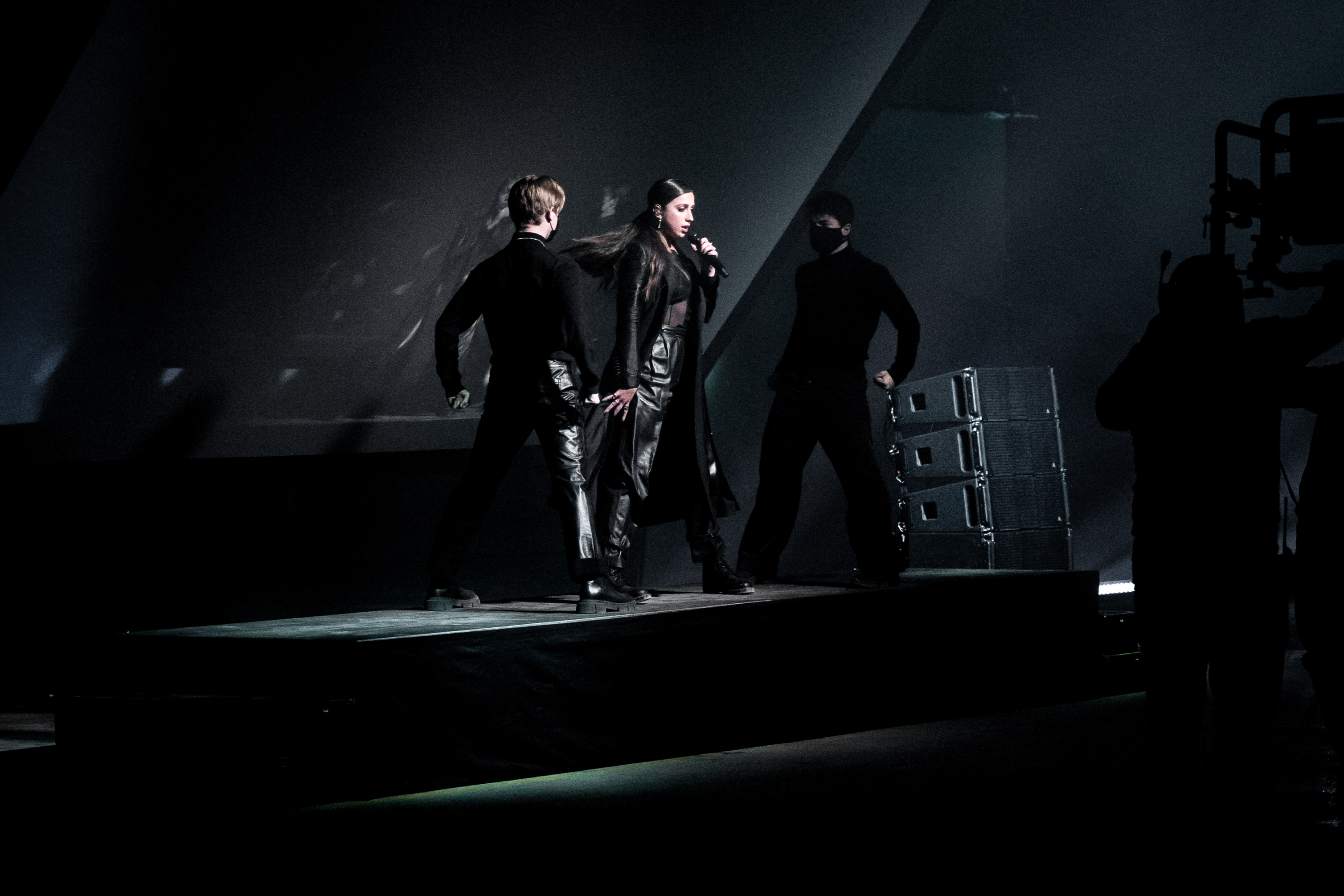 When times get tough, artists adapt, relentlessly leveraging leading-edge production technology to explore ever more innovative ways of making an impact with remote live performances. And that’s exactly what drove the deployment of an Adamson Systems Engineering loudspeaker rig for Tate McRae’s performance on The Tonight Show Starring Jimmy Fallon.

Directed by Jonah Haber and filmed in Brampton, Ontario, the Alberta-based, global pop sensation’s performance of her massive international hit, ‘You Broke Me First’ featured all the trappings of a high-end video shoot courtesy of Vancouver-based production house, Boldy, and set design, video and staging by Toronto’s Congo Blue Productions.

Typically on video shoots, audio is an afterthought. Not in this case, explains Jeremie Ngandu, who designed the system for the production and credits the Adamson loudspeakers as integral to the live energy and immediacy of McRae’s performance. “We converted a 28,000-square-foot warehouse into a performance space,” Ngandu says, adding that the set included four separate performance areas or ‘rooms’ that McRae moved between during the song – each kitted out with lighting and video screens to create a variety of effects.

Having worked with McRae on similar virtual live performances for The Jimmy Kimmel Show and The European Music Awards, Ngandu knows exactly what McRae and her dancers need to hear to pull off the high-energy performances McRae’s become known for. The Adamson system was a big part of that, he notes; in terms of ease of setup, the power and SPL necessary to set the tone and enhance the performance in what was, acoustically, a difficult environment, and, most importantly, in allowing Ngandu to provide great sound for both McRae and her dancers.

Soundbox Productions supplied Ngandu with eighteen Adamson CS10 line array cabinets and six CS119 subs, which he deployed in six ground-stacked positions each consisting of three CS10 on top and one CS119 on the bottom. These were spread across the set to provide even coverage as McRae and two dancers moved through the space. “I had the different zones on matrixes, so I could ride the levels as they moved throughout the set and could really feel the music everywhere. Using the Adamson stacks provided a live feel for the dancers and Tate,” he says, adding: “It’s important to keep in mind this was very much a live performance – one shot, no edits – so I think the ability to feel the track, with impact, enhanced the performance.”

The degree of control the system provided was also helpful: “This wasn’t an ideal environment. It’s a concrete space with a metal roof, exposed brick, and no sound absorption. That’s where the zones came in. Tate and her dancers felt every note and every beat of the drums because, as they moved, I’d bring up the level up in each area, but only to where I could still control the dynamics in the room."

"I really like the dispersion pattern of the CS10. It’s very focused, but it’s also wide and powerful so you don’t have to blast them to have that impact.”

That level of control benefitted everyone on the shoot, not least of all McRae herself. “Tate was on in-ears and that can be kind of isolating. So being able to have that live feel with the sub hitting her as she was singing and dancing, that helped a lot.”

Although this was his first use of CS loudspeakers, for Ngandu, Adamson is a known and trusted quantity. “I’ve used Adamson S-Series loudspeakers before, and I've done my Adamson Certification Training. I know how their loudspeakers sound and the power they pack.” Beyond that, he continues:

“With everything being spread out the way it had to be, having powered speakers connected via one cable was a game-changer. I didn’t have to run a whole bunch of amps and infrastructure.” As far as tuning, he adds: “It was pretty quick that way, too. I basically left them flat and had everything set up and patched in half an hour – I just plugged the speakers in, powered them up, and we were good to go.”

The final piece of the puzzle was a pair of Adamson CS7p two-way full-range loudspeakers that Ngandu used as reference monitors, “The CS7p were recommended by Soundbox and they really came in handy. I wasn’t sure what to expect, but when I played my own multi-track recordings through them before we started, the clarity, depth, punch; everything was there and the mid-range was so clear.”

“Tate was very pleased. She loved the sound overall, and I enjoyed having the CS7p as reference monitors. Tate wants her in-ear mix to sound like the studio record. That’s one of her biggest requests. I’ve listened to the record a million times. I know what it’s supposed to sound like and I know what Tate wants it to sound like. So, flipping between in-ears and the CS7p, you hear a true representation of the mix, which helped a lot. The CS7p allowed for a clean, tight, and punchy mix that translated one-for-one, exactly the way she wanted it to.”

The clean look of the Adamson CS10 and CS119 also lent itself perfectly to the final result, he adds. Although he’d watched the performance already, seeing it in context during The Tonight Show brought that home. “It was great to see all the hard work pay off and the system looked so good. The way the lights were hitting it. It was so clean.”

Most importantly, the performance was phenomenal. Not surprising given the accolades the 17-year-old pop singer/songwriter has racked up since her first release, ‘One Day’, went viral in 2017. Nailing it so perfectly, particularly without an actual crowd in front of you, isn’t easy, but McRae certainly made it look that way.

“I think the systems we had in place helped her lock into the music and feel like she was in a live space. A lot of the time, on studio sets, you have one or two speakers and you just have to pretend you’re performing as if you’re in a larger-than-life space. Having the Adamson system helped emulate being on a real stage with all the PA, subs, and power. I feel like that allowed Tate to lock in and deliver the performance that we all saw.”

See it on the web.