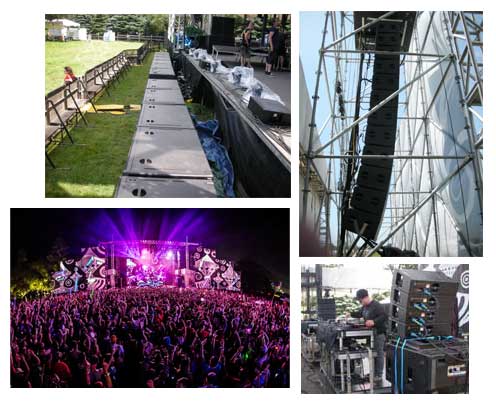 Electric Forest is a music festival held in Rothbury, Michigan that features an electro-themed set of concerts that take place on six stages over the course of four days.

Burst Sound & Lighting Systems, based in Detroit, was tapped to provide sound reinforcement systems for the main Tripolee stage as well as The Observatory, one of the smaller stages at the festival.

"We rolled out a complete E15 line array rig for the Tripolee stage," explains Scott Ciungan, operations manager for Burst. "The system was so clean, it's like listening to a pair of studio monitors at 130 dB – absolutely pristine."

"The arrays were hung behind scrim on scat bays constructed to the left and right of the stage," Ciungan adds. "The subs were stacked to create one big, wide sub. In order to make the coverage more even across the listening plane we delayed the last four subs on each side 7 milliseconds. We were able to get the low end down to 25 Hz which was really impressive."

Eight Adamson SpekTrix loudspeakers were placed on the lip of the stage for front fill. Eight more performed monitor duty, ground stacked to the left and right of the DJ booth.

"The stage was 70% DJ music with everything else electronic," Ciungan adds. "The system covered 300 feet and then just dropped off, which was exactly what we wanted. Nice and clean with no bleed into any of the other listening areas."

The Adamson system was powered by Lab.gruppen FP 7000 and 10000Q amplifiers. Burst utilized 14 Lake LM26 processors for the stage with XTA 424 processing on the TT21 subs.

"The Observatory stage was much smaller and featured more acoustical acts," explains Ciungan. "With a total capacity around 200, it was almost a traditional theater layout."

"With 40,000 attendees on site for four days, Electric Forest is a non-stop music experience in the middle of a forest in Michigan," concludes Ciungan. "It's important that the sound systems reinforce the immersive experience attendees expect. The Adamson systems were fantastic – we couldn't have asked for a more ideal setup."