American music legend John Fogerty continues to entertain fans around the world with regular touring throughout North America and overseas. His most recent tour marked a complete departure from his regular audio system of many years – this time going on the road with the new Adamson Energia PA provided by Atomic Pro Audio.

“I’ve been working with Atomic for almost 20 years,” explains Tim Schad, production manager working with John Fogerty since 2006. “I was sold on Adamson the first time I used it and have started working in different pieces of their gear with John over the last 6 years, but this was the first time we went out with 100% Adamson PA and monitor rig. The new Adamson Energia PA was “way better sounding” than any PA available out there at any cost.” 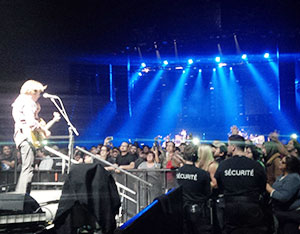 Atomic Pro Audio, located in Rutland, Vermont, has been a supporter of Adamson since 2002. Most recently they expanded their huge Adamson inventory with the addition of Energia E15 and E12 line array enclosures as well as E218 and E219 subwoofers. They have been providing audio equipment for John Fogerty tours since 2009.

“Atomic owner Kevin Margolin did an amazing job putting together a complete audio and video package for us this year that included the new Adamson PA and monitor system” adds Schad, “Atomic’s crew headed up by system-tech George Perone is easily one of the best I’ve ever worked with in my 35 years in this business. Ingenious packaging, great gear and a talented, caring team make all the difference out here and both Adamson and Atomic do beautiful work in engineering their systems assuring we have great sound, ready in time for doors… every night.”

John Fogerty is known for his attention to detail, particularly when it comes to the sound quality of the audio system. He regularly walks the room working with the system tech, Schad and FOH Engineer Felix Brenner, to make sure that every seat in the house has the same high fidelity sound.

“The move to the E15 rig is a huge change – it sounds so good John doesn’t comment on system tuning anymore. It completely eliminates the need for me to walk the room with him and the system tech, freeing up valuable time,” Schad says. “He basically just works with drummer Kenny Aronoff on his snare sound for the day, then gives George a thumbs up and heads to the stage – we are all very, very happy with the new Energia PA.”

The main PA consists of up to 32 E15s for the main arrays and 20 E12s for outfill. Twelve E218 subs were flown – six per side – while ten E219s were ground stacked (5 x 2) placed equidistant across the width of the stage. Ten SpekTrix front fills complete the package.

“I’m a big fan of Adamson’s T21 subs but I have to say that the E218/E219 combo was perfect for John’s music style,” explains Schad. “For old school rock they’re just super tight and extremely punchy.”

The monitor rig also featured Adamson gear. A total of 26 M15 monitors were used on stage. Fogerty uses an array of nine M15 wedges on stage along with flown left/right arrays of six Adamson Y10 side fills to surround his performance space. Band members also use multiple M15 wedges.

“The new Energia rig provides us with impeccable clarity throughout every seat in the venue,” concludes Schad. “The sound is absolutely amazing and the system goes up and comes down very quickly. We’re all looking forward to taking it out again this coming summer.”