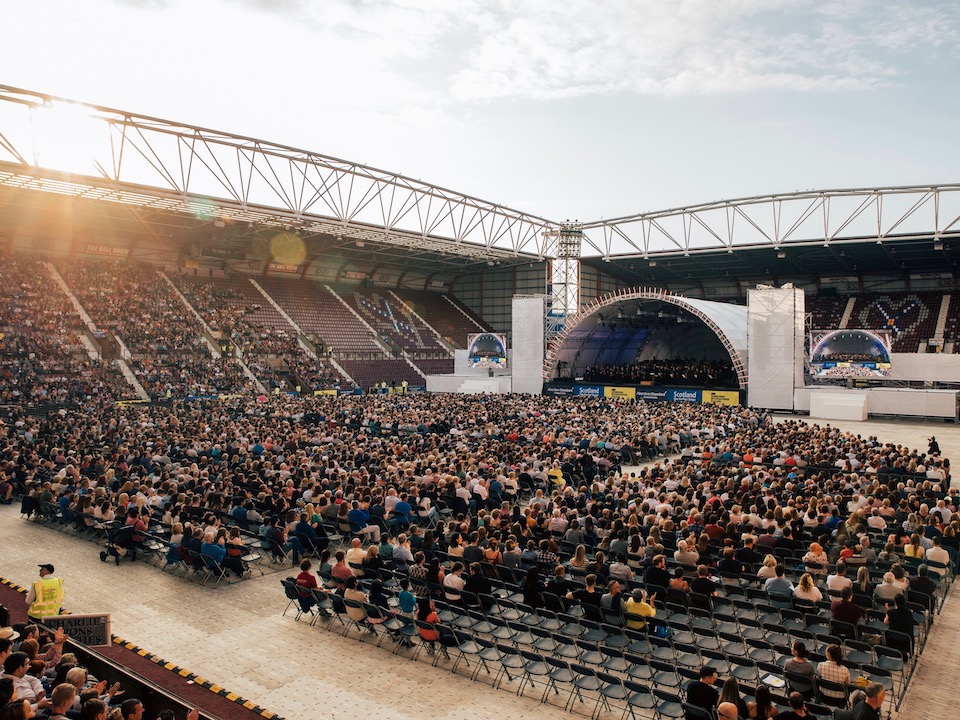 Billed as LA Phil at Tynecastle and presented by Aberdeen Standard Investments, the show kicked off the annual festival in front of a capacity crowd of 15,000 people in the storied stadium.

The concert, conducted by the electric Gustavo Dudamel, celebrated the Golden Age of Hollywood from a stage built to replicate the iconic Hollywood Bowl, where the LA Phil famously performs every summer.

Over the course of the performance, Dudamel and the orchestra filled the stadium with classic songs and scores from films including the Star Wars saga, Harry Potter series, E.T., and many others.

A longtime and key supplier to the EIF, The Warehouse deployed an audio system built around Adamson’s flagship E-Series, with main hangs comprised of E15 three-way, true line source cabinets; S10 two-way, full-range cabinets as under-hangs, the recently-released S7 for front and side fills, and E119 subwoofers for low-end support. The entire system was powered by Lab.gruppen amplifiers with built-in Lake processing.

FOH engineer Douglas Martin mixed on a Digico SD10 console. Also The Warehouse’s hire manager, Martin flew to Los Angeles the week before the show to take in an LA Phil performance and meet the orchestra. Douglas has extensive experience mixing orchestras and has worked with many leading producers worldwide.

“The E15 is perfect for an orchestral application,” shares Martin. “It’s a very natural-sounding system with all the power as and when you need it. You don’t have to compromise in any aspect of the mix as even the smallest detail translates perfectly across the whole frequency spectrum.” 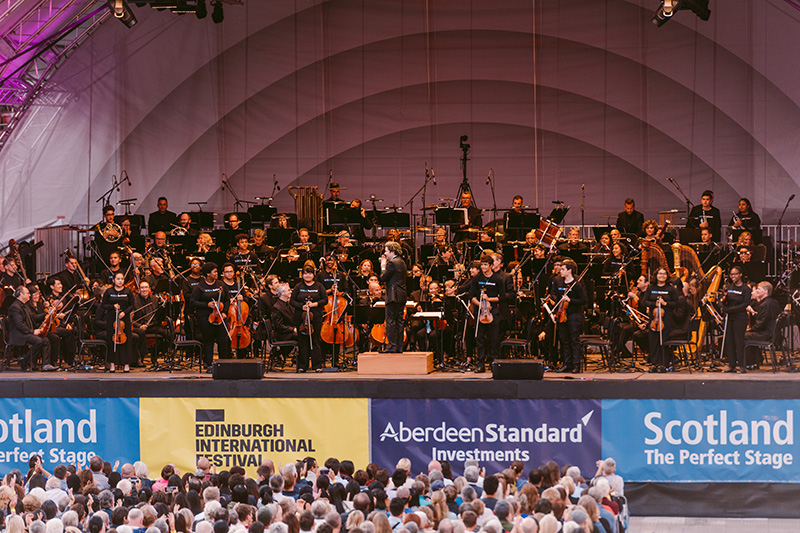 He also praised the side and rear rejection, which allowed the main arrays to be flown very tight to the stage without interfering with the players – even through the loudest and most impactful passages.

“My approach to orchestral mixing has always been to be as transparent as possible,” Martin continues. “Ultimately, the conductor and orchestra need to know that their interpretation of the work is being conveyed accurately – which is almost more challenging than normal with the LA Phil as they’re no strangers to performing amplified and outdoors all summer long at the Hollywood Bowl. With the Adamson E-Series and S-Series, this goal is made immeasurably easier and I was really happy with the results on the day.”

Martin was supported by a crew from The Warehouse consisting of Aidan Thomson, Graeme Brown, Simoon Meadows, Marc Freeman, and Kieran Blair.

The Financial Times reported: “Even through a PA system in a boxy, steel venue that usually echoes with football chants, the LA Phil’s sound was lush and precise,” while The Herald proclaimed: “Perhaps the quality of the sound at Tynecastle was the greater achievement … When it mattered, every detail of the orchestra was there.”

Commenting on their role in the successful opening event, Derek Blair, Director of The Warehouse, said: “We were delighted to be asked to do this concert and knew right from the start what a very special event it was going to be. The LA Phil are a really exceptional orchestra with a very talented and charismatic conductor. For this unique event, the sound had to be equally spectacular, and I think this was achieved very successfully with Douglas mixing the sound and the Adamson loudspeaker system. The Opening Event always puts a huge spotlight on Edinburgh; it’s a world-class event that we are so proud to be a part of.”