The Simply K-POP tour made a stop recently at the Shanghai Mercedes Benz Arena in Shanghai for a concert “in the round”.

Sound blanketed every seat in the arena compliments of Adamson Energia line arrays, T21 subwoofers supported by additional Adamson line arrays for front and side fill. 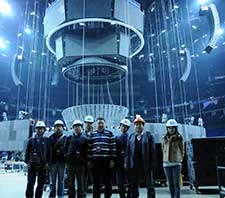 The Samsung-sponsored K-POP (Korean pop) concert – which drew more than 18,000 fans – featured popular K-POP stars G-Dragon, TAEYANG, Block B, f(x), U Kiss, Crayon Pop, VIXX and more. The concert is scheduled to be broadcast in mid-April on Arirang TV and Dragon TV to 192 countries, 105 million households and 330 million people around the world.

“It was the first time the FOH engineer, Eddie Kim, used an Adamson System,” explains Kim. “He left extremely impressed with the vocal quality and output. The system never fails to amaze people who have not heard it before.”

The main PA consisted of four arrays comprised of six E15 and six E12 enclosures – each covering a quarter of the arena. Short throw was provided by another four arrays, this time consisting of twelve Y18 enclosures. Front fill was covered by eighteen SpekTrix and four SpekTrix Wave boxes. Twelve M15 stage monitors completed the system.

“I was originally worried that the system would not be able to provide complete 360-degree coverage,” adds Eddie Kim, K-POP FOH engineer. “It turned out my concerns were for nothing. The Adamson team gave me the opportunity to use a wonderful sound system that provided clean and powerful vocals – it was truly amazing.”

The arena sound reinforcement system was powered by Lab.gruppen PLM, and FP series amplifiers. An Avid VENUE Profile was positioned at FOH along with ProTools for multitrack recording for the television production. In-ear monitoring was compliments of Sennheiser SR 200IEM systems.

David Dohrmann, Adamson Systems technical director, Asia-Pacific concludes, “This Korean-Chinese collaboration is an incredible multiplier in the region. The realization of such a complex cross-border project demonstrates the superior experience and knowledge of our partners Real Music and Sound Solution. It is very exciting to see our Asian network expanding at such a pace.”