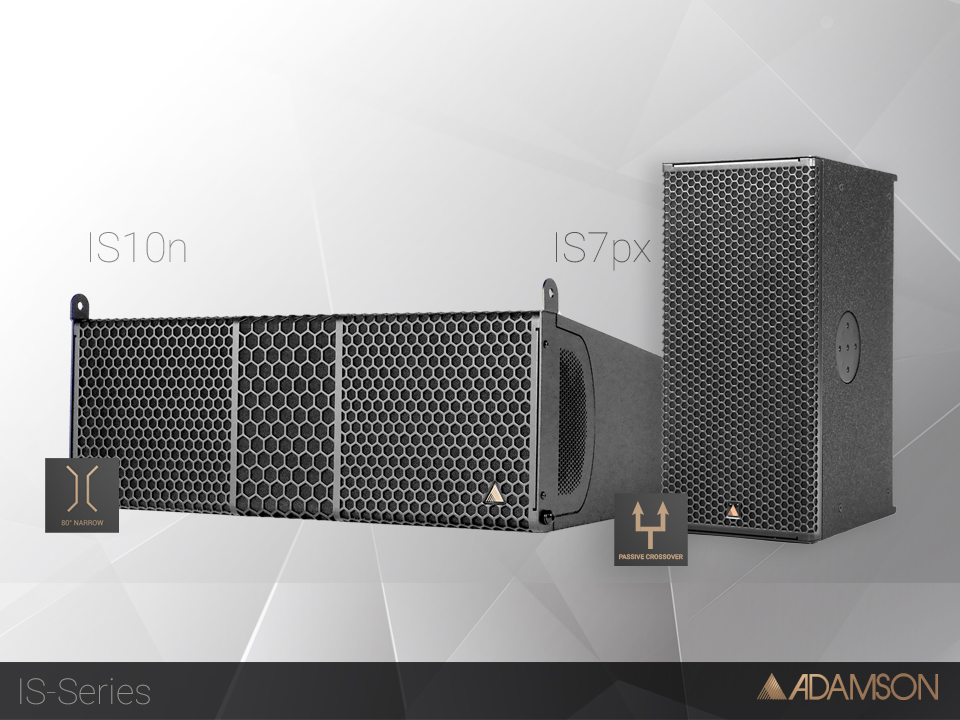 Adamson Systems Engineering will introduce its brand new CS7p point source enclosure – the first entry in a new generation of loudspeaker technology – to the European market at Integrated Systems Europe 2019 (Booth 7-C235). Beginning with the CS7p, the new CS-Series will be the world’s first family of mobile loudspeakers to feature onboard Class-D amplification, DSP, and Milan-ready (AVB) network endpoints.

As well, Adamson will bolster its install-focused IS-Series with a pair of new offerings: the IS10n, a narrow-dispersion version of the IS10 two-way, full-range line array cabinet, and the IS7px, a passive two-way, full-range point source enclosure.

“We’ve invested heavily in our R&D and manufacturing infrastructure in recent years to bring Brock Adamson’s proven approach to innovation into the digital audio landscape,” comments Marc Bertrand, Adamson CEO. “The CS-Series represents our amplified focus on technological convergence and enhanced ease of use, as exemplified by our work with the AVnu Alliance on the Milan protocol. Meanwhile, the latest additions to the IS-Series set the stage for a number of new product introductions throughout 2019 and beyond.”

The CS-Series builds atop the proven foundation of Adamson’s tour-grade S-Series and install-focused IS-Series. In its first iteration, the CS7p has been successfully used as a FOH near-field monitor at high-profile events such as the Hillsong Conference (Australia) and on the Drake and Migos North American tour.

The CS7p employs Milan-ready redundant AVB technology with the ability to daisy-chain networked audio between multiple sources in addition to an analog XLR input and output. Acoustically, the CS7p contains two 7-in. Kevlar® Neodymium transducers and a 3-in. compression driver, loaded with a rotatable 70 x 40 (H x V) waveguide. The dipole arrangement of the cabinet provides a stable polar response, and the CS7p can also be paired to increase horizontal coverage and overall output.

“The building blocks in the CS-Series, which we’ll be expanding in the coming months, will simplify complex system deployments by eliminating complications in network infrastructure,” shares Benoit Cabot, Director of R&D at Adamson. “Of course, these advanced features build on the foundation of premium audio and build quality that spans the S-Series and IS-Series.”

The IS7px is a passive two-way, full-range point source cabinet containing two ND7-LM16 low-mid drivers and an NH3-8 1.4” exit compression driver with a passive crossover, resulting in a nominal impedance of 6 Ω. The rotatable prolate spheroidal waveguide produces a nominal dispersion pattern of 70° x 40° (H x V). The design of the waveguide ensures equal tonal balance when moving outside of the intended coverage pattern, delivering natural sound with no diffraction or lobing.

The cabinet construction for both the IS10n and IS7px uses marine-grade birch plywood as well as aircraft-grade aluminum and steel. They come equipped with two Speakon NL4 connectors (IS10n and IS7px) or barrier strips (IS10nb and IS7pbx). A plate-and-screw rigging system is recessed in the interior of the rear rigging fins of the IS10n and placed on four faces of the IS7px for deployment in a variety of applications.

These three new offerings are currently shipping, and will be on display alongside some of Adamson’s other heralded loudspeaker products at ISE 2019, Booth 7-C235.