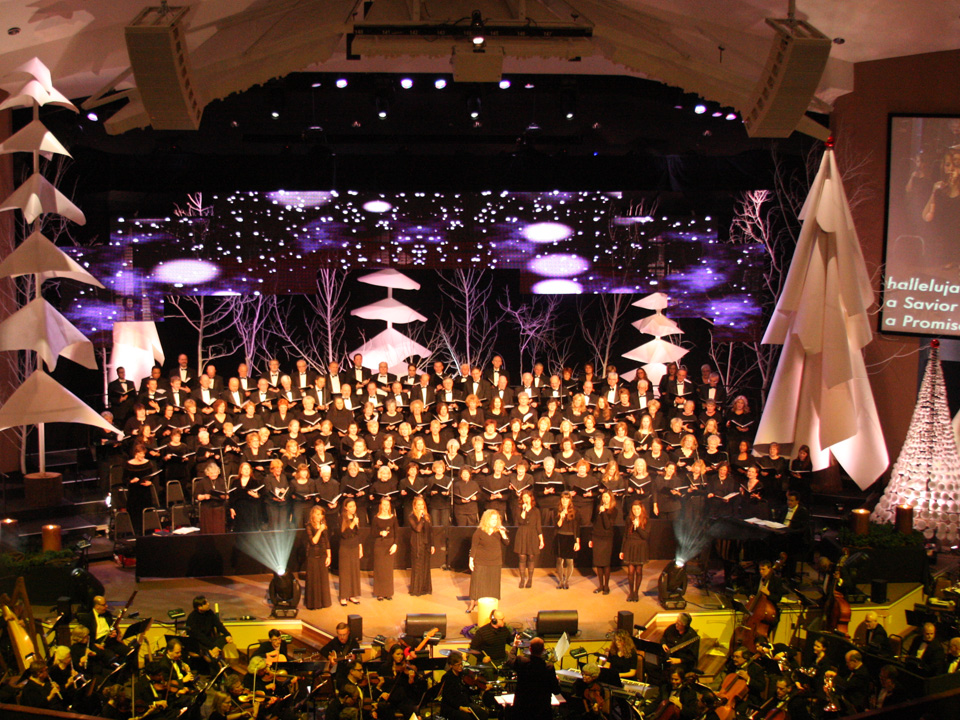 The Chapel, located in Akron, Ohio, added another campus to their rapidly expanding church in 2003. Since then the Green Campus, located in Green, Ohio, has become a staple of the community.

Because the worship services vary including live praise bands, piano, or choir, it was important that the system be musical while also providing the intelligibility important during services.  On occasion the sanctuary is also used for concerts, which have a different set of requirements as well.

The church leaders called in Pro Audio Innovations, located in nearby Canton, Ohio, to assist with the design and installation of a new system that would handle their needs today and in the future.

“The sanctuary is a clamshell shaped room with a balcony and ramped seating on the sides,” explains Dan Giarrana, owner of Pro Audio Innovations. “The room seats around 1,700 and the services are very well attended. They wanted a new system that would cover the room evenly and also be aesthetically attractive.”

Giarrana explored a number of system concepts before deciding upon a line array system. After that it was a matter of deciding which one.

“There are a number of great systems on the market, but when we checked out the Adamson SpekTrix line arrays we knew we had found our solution,” adds Giarrana. “Online Marketing, the local rep firm was extremely helpful with fine-tuning the design and providing installation advice.”

The main PA consists of eight SpekTrix enclosures flown left and right, run in stereo. A center cluster of two SpekTrix subwoofers are flown in a cardioid pattern – making a complete in line 4-way system. Two T21 subwoofers located on the ground crossed below the SpekTrix subs receive an analog signal sent on an aux, creating essentially a 5-way system.

The Adamson SpekTrix Series offers the benefits of a true line-source array via patented wave shaping sound chamber technology. The SpekTrix is a three-way enclosure exhibiting extremely high output for its compact size. The sound chamber has a defined coverage pattern of 5-degrees vertical by 120-degrees horizontal and produces a slightly curved, iso-phase wave front.

The SpekTrix Sub is equipped with two powerful 18" AW18 Kevlar® Neodymium bass drivers mounted in a tuned, vented and fully braced cabinet. The single-sided enclosures may be arrayed conventionally or in back-to-front pairs for true cardioid performance.

The side, ramped seating and balcony fill is provided by 9 Adamson Point Concentric PC12 loudspeakers run passive and inline with the main AES L/R feed.

Once the system was designed, it was time for installation, which presented more of a challenge than originally anticipated.

“In order to hang the arrays to optimally cover the room, they needed to be at a certain height,” explains Giarrana. “Once we explored the ceiling we realized that a) we were going to have to build a structure that could handle the weight of the arrays and b) it would have to hang down 11 feet in between heat ducts already in the ceiling – so there was little room to work with.”

Needless to say, Giarrana and his team were up to the task. They built a structure that could hold the 2,000 pounds and also included motors that could raise and lower the arrays for maintenance if needed. All of the chain, wires and cable lines were neatly hidden in 4-inch conduit painted to match the line arrays.

“The church leaders are absolutely ecstatic with the results,” concludes Giarrana. “They could not be happier. The have heard nothing but compliments from their members and everyone is in agreement that this was a tremendous upgrade to services.”