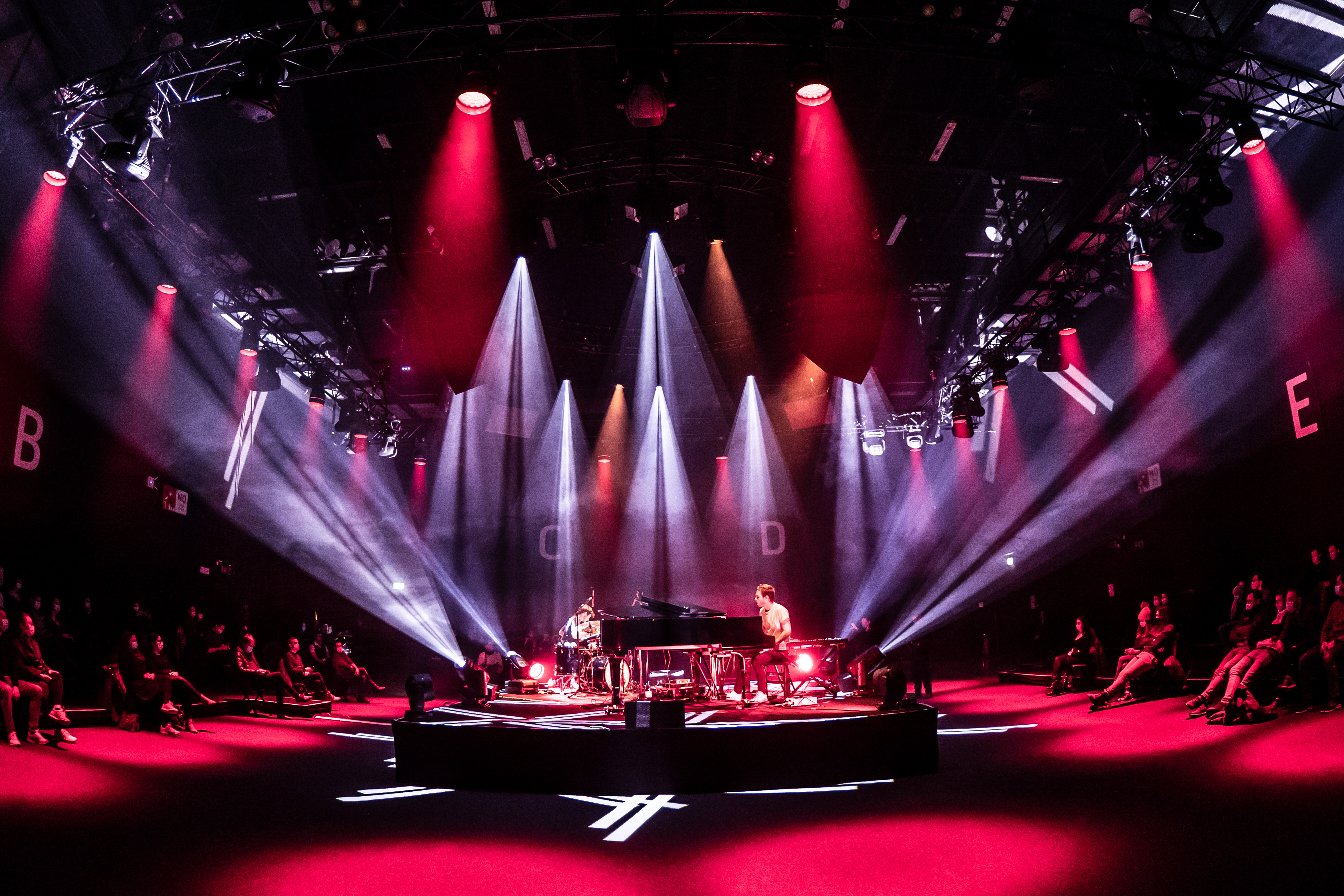 Glass Museum play for a socially-distanced audience at Rockhal as part of Because Music Matters.

Given that the Rockhal sits on Avenue du Rock’n’Roll, it is no surprise the venue raised its fist in the air to host five concerts aimed at gathering data to work towards the return of live events.

The “Because Music Matters” concert series was set up in partnership with the Luxembourg Ministry of Health to evaluate how future concerts can be presented safely and sustainably across the continent and beyond. The shows were mounted in the 1,200-capacity Club space at Rockhal (Luxembourg’s Centre de Musiques Amplifiées) with a range of safety and testing measures in place.

When renovations – including a new balcony – are completed in the Club hall, the IS-Series rig will be deployed as a stereo system featuring ten IS10 and three IS119 subs flown per side, two IS219 subs ground-stacked per side, and six IS7P as fills – all powered by Adamson D-Series amplifiers (two pairs of D120 and D80 for the IS10, two D200 for the subs, and three D40 for IS7P).

The safety-first Because Music Matters shows demanded an ingenious change to the system configuration that kept the socially distanced audience connected intimately to the performances.

“For this set up we could easily adapt it to provide 360-degrees of coverage because of the wide but precise 110-degree horizontal dispersion the loudspeakers provided,” says Michael Flick, Audio System Engineer for Lumicon SARLS. “We were able to address all the seats around the stage using four hangs of five cabinets each.”

The compact design and power of the Adamson IS119 and IS219 subs were also beneficial, he adds:

“Even with 19-inch speakers inside them, we were still able to place them under the 60cm-high stage, and they produce a massive but precise and dry low end.”

Rockhal’s decision to unveil the new system in a 360-degree set up helped provide their valued customers – and sound system connoisseurs – with a truly exclusive experience that enhanced the connection between artists and audience members. The event team was committed to bringing back the sense of shared energy and emotion that is core to any live concert, and that so many people have missed desperately since the pandemic was declared.

That’s been a preoccupation for everyone at the Rockhal since the venue shut down in March 2020, notes Olivier Toth, Rockhal’s CEO: “From then on, we made ourselves and the venue ready to be reactive and to develop different scenarios. So, when cultural institutions were allowed to open in January, we decided to bring it on with a series of exclusive, intimate performances showcasing a very specific setup of our room and, of course, our new Adamson system.”

Granted, some in attendance were uncertain how effective this particular configuration would be. “I decided to visit the show to listen to Claire Parsons, who I know from my work as a mastering engineer,” says Marko Schneider of Imagion AG/Skywalk Mastering GmbH.

“I was skeptical when I found out it was planned as a 360-degree concert with a central stage, but it was really impressive, very studio-like, and with amazing resolution in the highs.”

More importantly, Schneider also felt entirely secure from a health point of view given the Rockhal’s strict adherence to Luxembourg’s 100-capacity limitation for cultural events, enforcement of physical distancing and mask protocols, and a comprehensive testing regimen that involved administering COVID-19 tests before the event and a week following the shows. “The organization was so good that I'm sure at no time was there any risk of infection. It was a real pleasure to see how well an event such as this can be organized during these times and made me hopeful about seeing and hearing more concerts at such a high level.” Which, naturally, is exactly how the Rockhal hoped everyone involved in Because Music Matters would feel.

Given the success of the shows and the reviews of the system itself, the consensus at the Rockhal is that the Adamson IS-Series system is a definite leap forward from their previous audio infrastructure. “It’s powerful, precise, and pleasant-sounding,” Rockhal’s Sound Engineer Franck Chainais, notes.

“The bass is punchy. The midrange is present without being overly aggressive. The treble is very clear and it reproduces vocals in a very natural way. Also, there’s a real feeling of presence. One gets the impression of being one metre away from the speakers even when they’re fifteen metres away.”

But the benefits extend beyond the audio quality of the loudspeakers, he adds, citing Adamson’s ongoing support of artists and venues hoping to find innovative ways of keeping live performance alive worldwide. “We very much appreciated Adamson’s interest in the Rockhal, and how committed they are to providing us with the best solutions.”

Beyond being a commercial player, Chainais sees Adamson as a highly valuable technical partner whose know-how they can benefit from and rely on going forward: “Their team got the idea of what we wanted to do very quickly and were very keen to help us create this special 360-degree setting. Having heard the system in the room, I must say that the sound is great. It’s transparent. It’s powerful, and it provides all the versatility we need for the different musical genres the Rockhal features.”

While the concert series was born out of the desire to better understand the behaviour of the virus inside a concert hall, something much more meaningful was also accomplished: “For us, for everyone involved,” Toth says, “this event was a sign of hope and optimism; a chance to work together towards the safe, progressive, and sustainable return of live concerts.”

See it on the web: