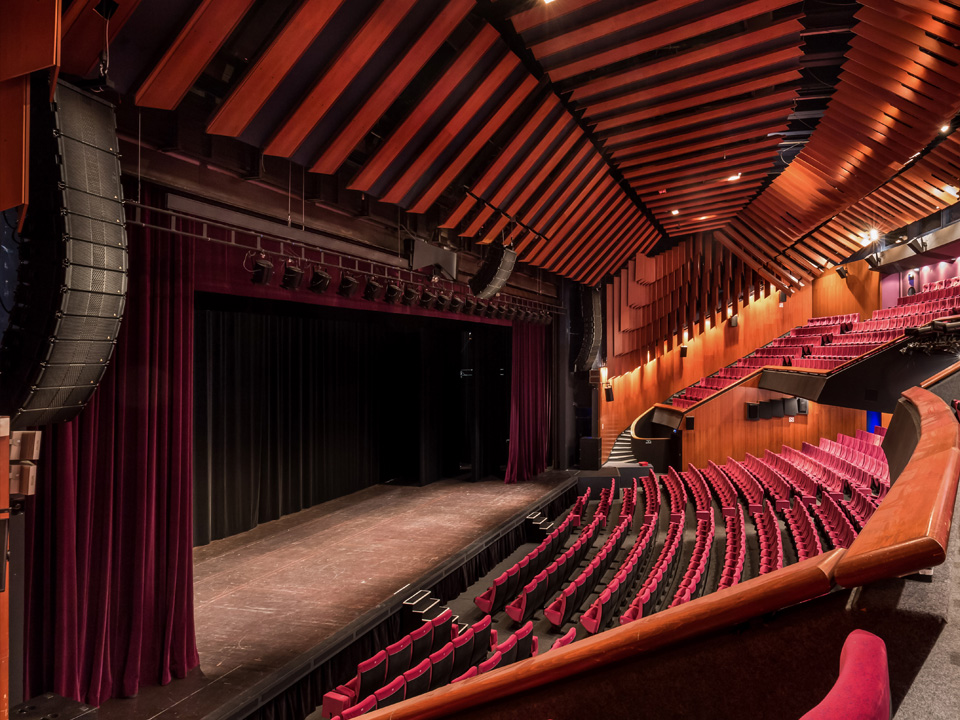 Palais des Festivals, home to the Cannes Film Festival, is one of Europe's leading conference and entertainment venues. The building features five main auditoriums as well as numerous committee rooms and administrative offices.

The combination of Adamson and the Palais des Festivals began 15 years ago when the newly formed DV2 (Adamson's distributor in France) designed a sound reinforcement system featuring Adamson Y10 line arrays for the Auditorium Louis Lumiere. The system, which is still in use today, continues to receive compliments from those that perform in the space.

Recently DV2 was called upon to design another system for the Claude Debussy Theatre, the second largest theatre, with a seating capacity of 1,068. DV2 designed a system featuring the new Adamson S Series line arrays. Dushow, one of the biggest rental and installation companies in France, was responsible for the installation of the new system.

The configuration, similar to the Auditorium Louis Lumière, is made up of left-right line arrays and a center cluster. The left and right arrays each consist of 10 S10 enclosures with two S119 subwoofers, positioned at the top of each hang. The centre cluster is made up of six S10’s. Two additional E219 subwoofers are ground stacked. Four Adamson two-way Point 12 loudspeakers are used as font fills and outfills for additional coverage.

"This design has delivered exceptionally well for 15 years in the Auditorium Louis Lumière," explains Didier Dal Fitto, DV2 technical director. "As a result, the Palais’s sound crew decided to use the same concept for Debussy. Dushow installed two of the new S119 subwoofers at the top of the left and right arrays, which gives enough subwoofer pressure to cover conferences applications. A complement of two E219 stacked subwoofers and Point 12’s are added for more solid music programs.”

Seven Lab.gruppen D120:4L amplifiers provide power to the main PA and subwoofers, while two D80:4Ls power the ZX101’s. A Dante digital network is the backbone of the system along with a Cisco SG300-20 20-port gigabit managed switch. The intercom system for the theatre was provided courtesy of Clear-Com.

In the upcoming months, Pygmalion, The National Dance Company of Korea, Dance School of the Paris Opera, National Company of Dance from Spain, Fiddler on the Roof and Othello will all experience the benefits a new sound reinforcement system brings to the theatre. And next year the Cannes Film Festival will take centre stage in May, MIDEM in June and MIPCOM in October.

Photo caption: The configuration, similar to the Auditorium Louis Lumière, is made up of left-right line arrays along with a center cluster made up of S10 enclosures.
Hi-res Photo Download: http://bit.ly/1PxySn3