Adamson Systems is pleased to announce that 013, the largest live music venue in the Netherlands, has decided to upgrade their main hall (the Jupiler Hall) with a complete Adamson sound reinforcement system 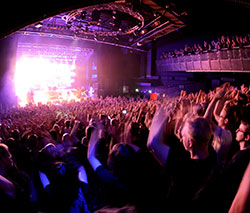 Located in the center of Tilburg, 013 was the first concert hall in the Netherlands purpose built for live music. Since its opening in 1998, artists like Robbie Williams, Nice Inch Nails, Muse, Snoop Dogg, Damien Rice, Kraftwerk, 30 Seconds To Mars, Slayer, Queens Of The Stone Age, Sigur Rós, Editors and Interpol, have performed there.

The Jupiler Hall can currently accommodate up to 2,000 ticketholders with expansion plans that will allow capacity to increase to 3,000. The hall is known for its U-shaped balcony with dramatic stairs that ascend to the main floor. The room was designed to ensure an excellent view of the stage from any seat in the house. As a result the space retains an intimate feel despite its capacity.

"After months of extensive demos with several excellent systems, the Adamson system came out on top," explains Herbert van Sloun, head of production at 013. "Our criteria included overall sound quality, the support of the organization behind the system, the rider-friendliness and the operational cost. In the end choosing Adamson was the only logical decision to make."

The new PA will handle the venues needs for everything from smaller musical acts to heavy rock shows and electronic dance music. It consists of 18 Energía E15 enclosures – two arrays of nine – hung to the left and right of the stage with 3 SpekTrix cabinets added on either side for downfill purposes.

"Everybody – the audience, the 013 employees and in-house and visiting sound engineers – were literally and figuratively blown away by the sound of the Adamson E15," van Sloun concludes. "We can hardly wait to have the system in house and operational."