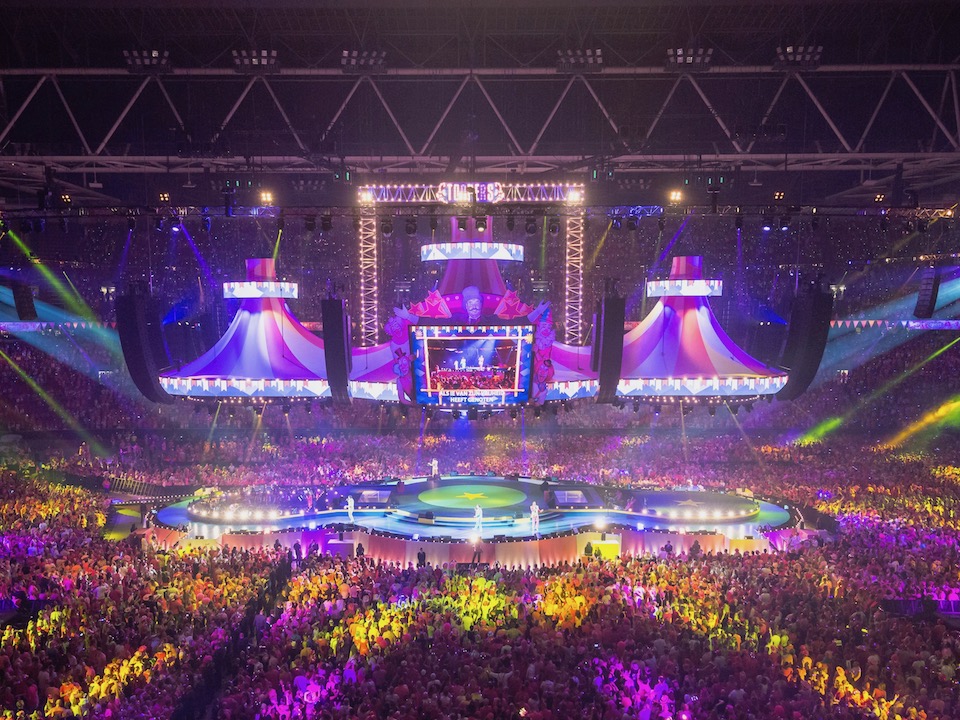 Every year, Dutch supergroup De Toppers take over the 68,000-capacity Amsterdam Arena for a string of sold-out shows billed as “the sing-along party of the year.” As usual, the 2018 “Pretty in Pink – The Circus Edition” concerts were among Holland’s hottest tickets so far this year, and it was a substantial Adamson E-Series system from Ampco Flaslight Rental that brought the hits to the capacity crowd.

The high-profile foursome – consisting of singers Rene Froger, Gerard Joling, Jeroen van der Boom, and Jan Smit – combined a spectacular circus-inspired stage design with a set list combining crowd-favourite covers and originals for the one-of-a-kind experience. Presented in-the-round, the shows were supported by over a dozen flown E-Series arrays to ensure complete coverage and high-impact sound for every single seat.

“I loved mixing on this system,” says longtime Toppers FOH engineer John Kriek. “This is a unique application considering the size of the venue, the in-the-round set-up, and the fact that people love to sing along. We needed great coverage, plenty of punch, and impeccable clarity to be heard over an arena full of fans, and Adamson’s E-Series was totally up to the job. Also, many thanks to the Ampco Flashlight Rental crew, techs, and engineers. Reservations are already made for next year.”

“We’ve been supporting De Toppers at Amsterdam Arena since they began this special series of shows back in 2005,” says Ampco Flashlight CCO and COO Dennis van der Haagen. “Every year, we’re looking to one-up the experience for fans to create a really special night, and the Adamson system was integral to those efforts this year. We had crystal clear sound throughout the entire arena with headroom to spare, making for an unforgettable show.”

Since forming in 2005, De Toppers have performed at a sold-out Amsterdam Arena every summer in what has become the longest-running concert series in the Benelux Union of Belgium, the Netherlands, and Luxembourg. Each year, the pop supergroup puts together an elaborate stage design loaded with special effects and invites a series of special guests for a truly remarkable night of music.