The 101st Grey Cup festival was recently held in Saskatchewan, Canada, featuring three nights of shows with artists such as Hedley, Barenaked Ladies and Big & Rich at the Brandt Centre in Regina. 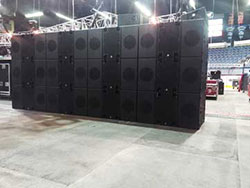 Tour Tech East, based in Dartmouth, Nova Scotia, was called upon to provide sound reinforcement and production services for the festival. The company recently joined Adamson's Energia program and invested in a new E15/E12/E218 PA.

"We hung 12 E15s with 3 SpekTrix to the left and right of the stage – 30 enclosures total – supported by 16 E12s for outfills (8 per side) and 24 E218 ground stacked subwoofers," Petrie explains. "It sounded incredible. That combination is extremely hard to beat in terms of output, fidelity and low end. All of the bands were very impressed."

The optimized sound chamber produces a slightly curved wavefront with a nominal dispersion pattern of 110° x 8° (HxV). The enclosure’s efficiency allows for increased horizontal dispersion without sacrificing high frequency in the far field.

"The E12 sounds absolutely fantastic," adds Petrie. "It not only works great as outfill but we have every intention to pair it with the E218 sub and use it as a stand-alone system for small to mid-sized venues as well. It is an extremely flexible system."

The newly introduced E218 features two lightweight, long excursion ND18-S Kevlar® Neodymium drivers mounted in an efficient band-pass cabinet. In addition to ground stacking, the E218 can also be flown utilizing the Energia Modular Rigging Frame which allows the E218 and E12 cabinets to be flown in the same array.

Tour Tech East completed the system with 4 Metrix and 2 Metrix Wave enclosures for front fill. Adamson representatives were on hand to assist with deployment. 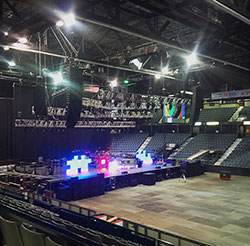 "I can't say enough about the event," concludes Petrie. "Everything went off without a hitch and the audience, the bands and the Grey Cup people were very, very happy with the end result."