The second half of the Indochine Black City tour kicked off with sound reinforcement once again provided by Adamson E15 and E12 line arrays and T21 subwoofers. The first half of the tour deployed the same Adamson system. 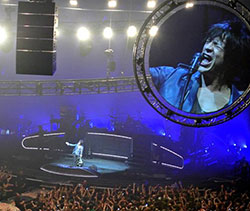 The Black City Tour is performing in large venues throughout France, Belgium and Switzerland culminating with a performance at the Stade de France in June.

Nicolas Sirkis, the front man and lead singer for Indochine, assisted in the creation of a sound, lighting and video show that promises to dazzle audiences everywhere. Philippe Dubich, the sound engineer for Indochine, specified the Adamson Energía sound reinforcement system.

The system was designed by system engineer Julien Poirot. He along with his assistant, Wilfried Lasbleiz, have flown the versatile E15 and E12 line arrays in every venue and have been impressed with their sonic quality and coverage.

"The E15 is a system that combines powerful dynamics , clarity and precision ... I love this system, it would be ideal for many different projects," Poirot explains. "Indo on the E15/T21/E12 combination works well and gives us an impressive sound homogeneity throughout the venues. The result is top notch."

Due to moving screens constraint, the second part of the venue is blanketed by two more E12 arrays – this time made up of 6 enclosures each. In order to provide attendees in the first few rows with a clear vision of the stage and the multiple screens, two more downfill arrays – four E12s each – were installed in the scenic grill.

Twenty T21 subwoofers in two columns of 10 push the low end of the system providing the beat that drives Indo fans.