The 2014 Sprint U.S. Snowboarding Grand Prix was recently held at Mammoth Mountain Resort in California. It was the last stop for snowboarders vying for halfpipe or slopestyle spots on the U.S. Olympic team.

Pacific West Sound, located in Bakersfield, California was on hand with an Adamson Systems sound reinforcement rig for day-long DJ music, announcements and award ceremonies throughout the five day event.

"The event needed sound at both competition sites as well as in the sponsor tent area at Mammoth," explains Danny Almeyda, sound engineer for Pacific West Sound. "They had music and a variety of announcements happening throughout the event and it was key to effectively communicate with all of the athletes and visitors." 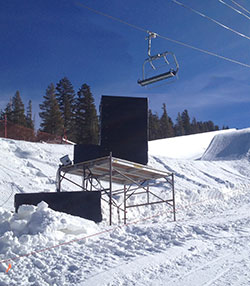 Pacific West Sound has been an Adamson "house" for years. With more than 50 Adamson Y10 mid-size 3-way line array enclosures in inventory, backed by 16 T21 subwoofers, it was only a matter of deciding what to use where.

"We ended up creating three identical stacks that were placed on scaffolding located at the bottom of the halfpipe and the slopestyle runs," Almeyda adds. "Each consists of six Adamson Y10s with one T21 subwoofer along with an amp rack loaded with Lab.gruppen amplifiers with Lake processing. It sounded fantastic."

Once Almeyda designed the system working within the clients parameters for placement of the scaffolding risers and stacks, he tackled how to get them to those locations. The outdoor nature of a ski resort combined with the crowds and athletes onsite for the competition presented its own particular challenges.  In addition, load in was scheduled to start at 4pm after the resort closed and needed to be done before dark.

"We used a snowcat and a forklift to place the slopestyle and sponsor area systems – which was a bit hairy but worked out ok," continues Almeyda. "But the halfpipe system was a different story. It was located further up the mountain a bit so we ended up hand carrying each piece to the site – thank goodness those Y10s aren't that heavy!"

With the stacks in place Almeyda and his crew ran XLR and power from FOH – located by the judges and announcers tent – to both the halfpipe and slopestyle stacks, each of which were roughly 100 foot runs. For the Sponsor tent area, which was more than 400 feet away, they sent a wireless audio signal and used power that was already at the site.

"We had to be very aware of where and how we ran cable and power," he adds. "There were snowboarders and people everywhere so it wasn't like a typical outdoor live sound event. The Sennheiser wireless system we used for the sponsor signal was a life saver."

Once the entire system was up and running it stayed that way for the duration of the event.

"We knew the snow and cold could be a factor," says Almeyda. "We weren't that worried about the Adamson loudspeakers because they use high-quality woofers, not cardboard, and we knew would hold up to the moisture. To combat condensation in the amplifiers, we kept them running so their own heat would handle that. It was a terrific system for a really, really fun event."